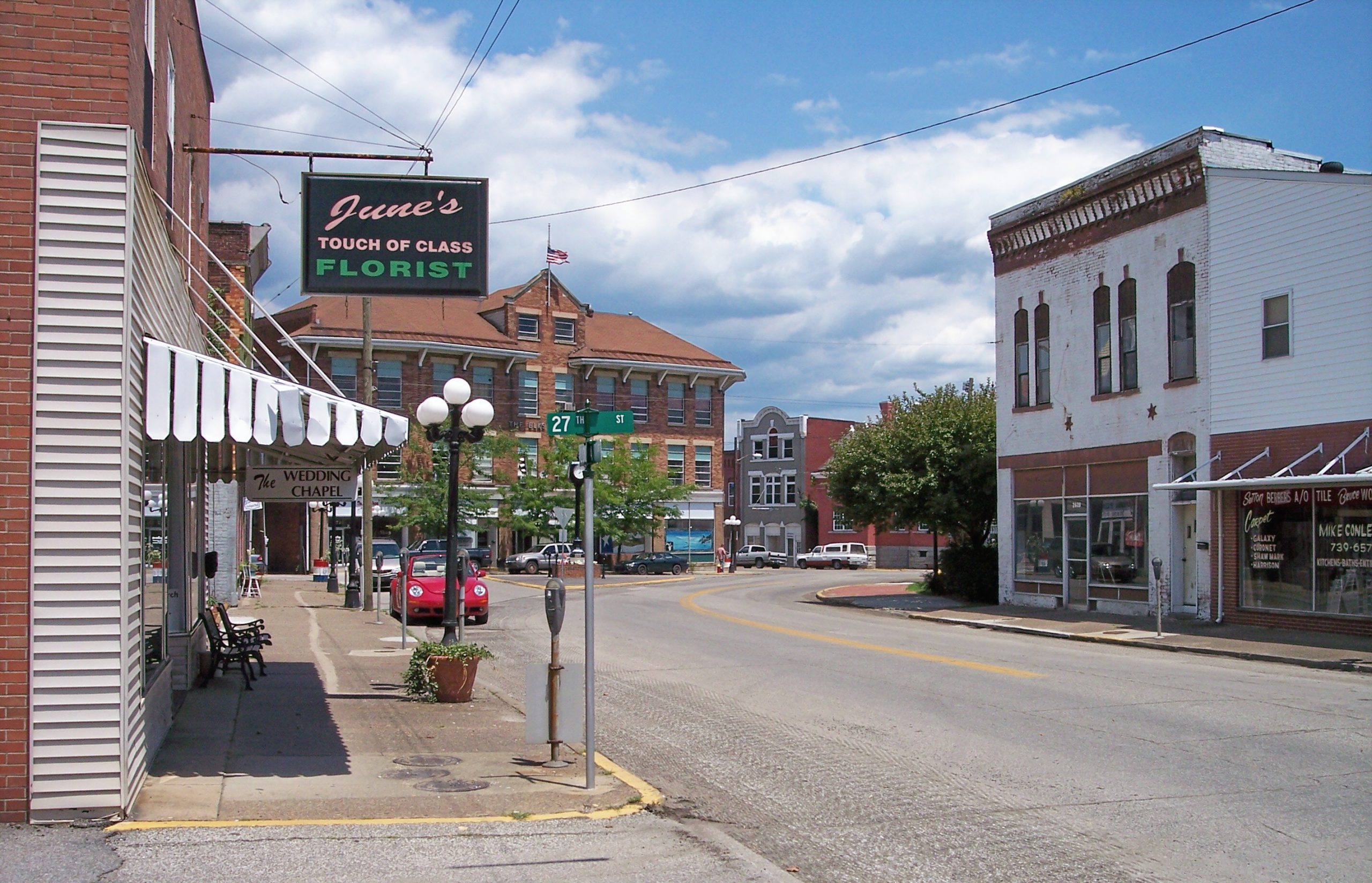 Catlettsburg’s history begins in the decades directly following the American Revolution, as many frontiersmen passed through the area on their western trek along the Ohio River. Alexander Catlett, the first landowner of the area, came to the site in 1798. His son, Horatio Catlett, opened a post office on December 5, 1810, with himself being the postmaster. This was the first known use of the name Catlettsburg being used officially as it had been previously known as Mouth of Sandy. In 1849, James Wilson Fry, a landowner who purchased the site from the Catlett family in 1833, sold off town lots of what was soon to be the town of Catlettsburg. (The Kentucky Encyclopedia says the Catletts settled the area in 1798) and Catletts resided at the location until 1847. After establishing this settlement, the Catletts operated a business that consisted of a tavern, post office, trading post, and inn, out of a log structure they built from virgin timber about 1811. Due to its location along the route of the American frontier, the Catletts provided hospitality to such notable patrons as General Stonewall Jackson, Henry Clay, Felix Grundy, and future U.S. President James Garfield. Catering to the ever-growing river traffic, the Catlett business flourished and the present-day town grew up around it. Collis P. Huntington operated the Chesapeake and Ohio Railway. Its line to Cincinnati was built from Huntington in 1888. This required the construction of the railroad bridge that crosses the Big Sandy River at Catlettsburg, which carries an average of 80 trains daily.

The Catlett House is still standing two hundred years later and has long been used as the “servants’ quarters” of Beechmoor Place, a large home located on Walnut Street (U.S. Routes 23 and 60). C.W. Culver bought the property from the Catlett heirs and built a large home of the Georgian style on the right of the Catletts’ original dwelling. About 1868, Col. Laban T. Moore bought the estate from C.W. Culver for $10,000 ($171,000 in 2011). Col. Moore was noted as a former member of the U.S. House of Representatives and had previously served as a captain in the Kentucky Volunteer Infantry. He named his home Beechmoor, a portmanteau of his surname and that of a magnificent beech that stood on the fertile grounds at the time. Ownership of Beechmoor has remained in the Moore family since 1868. Beechmoor’s eastern wing, being 200 years old and built by the Catletts, is cited as the oldest known building in a 300-mile radius. Built of Kentucky’s virgin hemlock maple (now virtually extinct), the exterior walls are between 9 and 12 inches thick. The main portion has a stone foundation and is held up by the same virgin timber, every 64 feet (20 m) in diameter, and running the entire 42-foot (13 m) width of the house. Beechmoor’s last full-time resident, Rebecca Patton, Col. L.T. Moore’s granddaughter, was dedicated to Beechmoor’s preservation during her lifetime. In 1973, she had her lifelong home listed on the National Register of Historic Places and made provisions to ensure the home would be maintained in the event of her demise. She died in 1986. Since then, it has been maintained by proceeds from a trust fund and rental property income. A paid caretaker lives on the property full-time as of 2011. Several attempts have been made by local civic groups to acquire the property as a museum or civic use property due to its historical significance to the area but have not been successful as of this time, due to the family’s desire to retain ownership.

The Catlett name is still used on a tributary to the Ohio River, Catlett’s Creek, which follows Kentucky Route 168 for many miles west of the city. Catlettsburg annexed two nearby communities on its borders in the late 19th century: Hampton City to the south side and Sandy City to the north.

The spelling of the city’s name was changed to Catlettsburg from the previous spelling of Catlett’s Burg c. 1890.

Catlettsburg served as a Union Army supply depot during the Civil War. The First Presbyterian Church, 26th and Broadway, served as an army hospital during the war. The church building still serves the congregation of the Presbyterian church in Catlettsburg. The current church, built-in 1875, is one of two truly gothic buildings still standing in the U.S. The church is of mid-to-late 19th-century Grecian design, with most original fixtures in place, and is sometimes used for wedding ceremonies.

The Catlettsburg National Bank building used to sit at the corner of Center and Division/26th streets was listed on the National Register but has been demolished due to the structure being unstable.

Beginning in the late 19th century and lasting until the early 1920s, Catlettsburg was the largest hardwood timber market in the world due to its location at the mouth of the Big Sandy River. Due to the profitability of harvesting such hardwoods, most all virgin timber that existed for several miles around Catlettsburg was felled during that period. Very few trees of desirable breeds such as oak were left standing once the boom was over, mostly to mark private property lines. One known exception to history’s hardwood harvest is the existence of a large oak, standing on a knob in the Hampton City section. With its origins dating to circa 1760, it measures 246 inches (6.2 m) in diameter. It is the oldest known living tree of any breed within the city limits and for many miles surrounding the city. There is also a hemlock maple tree (which measures over 350 inches in diameter) located on the same property, one of very few that remain in North America as they were all but extinct due to their heavy usage in home construction from 1750 to 1925.

Rail transportation began to slowly replace the river’s prominence as a mode of transportation as the Chesapeake & Ohio (C&O) railroad began construction of a bridge across the Big Sandy River linking Catlettsburg with Kenova, West Virginia in 1885. The bridge is still traversed by trains many times each day, as a part of CSX Transportation‘s (formerly C & O Railway) main operations. Known by railroad enthusiasts and historians from around the world, it is unique in design and historic value for its longevity. The bridge is also used by Amtrak‘s Cardinal passenger train, train numbers 50 (eastbound, toward Huntington) and 51 (westbound, toward Ashland), which carries passengers from Chicago to New York City. The Chatteroi railroad preceded the C & O by a few years as the first rail line to travel through Catlettsburg’s city limits, as it followed the Big Sandy River north from the coalfields to Ashland.

The Chesapeake & Ohio Railway built a passenger depot in Catlettsburg in 1906 and operated the facility for over 52 years until 1958 when passenger service was transferred to nearby Ashland. After closing the facility, C & O sold it to the city of Catlettsburg for $1. The city has maintained it and used it as a civic center since that time. In 2006, longtime Catlettsburg businessman and politician Russell Compton donated his own personal funds for the restoration of the train depot so it could be restored to its original appearance. Intensive restoration of the depot is now complete, featuring the original directional signage, etc. The facility was renamed the Russell Compton Community Center in 2007 in his honor. In 2010, Compton donated the necessary funds to restore an old C & O caboose to its original appearance. It is now parked on the side of the depot facility.

Other Things to DO